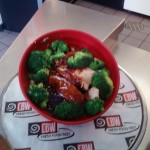 Today was a great day, this morning, I got up taught my “Your Body is His Temple” fitness class at church.  I had this crazy feeling that nobody was going to show up.  But, I was very wrong, there were about 8 or 9 class participants.  The even crazier part is that I did not even have a routine planned out, because I figured it was too cold and that nobody would come out on a Saturday morning.  I did however, prepare a work sheet the night before, just in case.  The worksheet talked about goals, and how to set realistic achievable goals.  I tried to hide my panic on the inside about my lack of preparation, and told the class, instead of  setting a goal to lose 50 pounds, set a goal to lose 1 or 2 pounds this week.  Then I used myself as an example.  I told the class, that I’m trying to get to my goal of only drinking water.  To achieve my goal, I didn’t set some outrageous goal, and try to cut out everything except water.  I started with the little things, like removing soda from my diet.  After our discussion on proper goal setting techniques, it was time for the fitness portion of the class.  Luckily I had some printouts from the last time I taught the class.   I think it went over pretty smoothly, nobody told me I looked lost, and like I was making it up as I went along, although, that was certainly what I was doing!  It turned out to be a really good workout, I was sweating, the other ladies were sweating.  It was a lot of fun to have my celebrity Aunt from L.A. in my class.  She said she really enjoyed it, and gave me some Hollywood tips to make class more fun.  After class, I had a hair appointment with my Big Little Sister at her salon.  I didn’t have time to go home and make something healthy, and I didn’t really want semi-healthy food from McDonald’s.  I kept trying to figure out what to eat.  As I was driving, I was kind of drawn to this place called Crazy Bowls and Wraps. I’ve been driving past this place since High School, and I never once, tried it.  I decided to be adventurous and give it a try.  It was fantastic, they had all sorts of healthy food.  I opted for the bowl that was only 500 Calories. I had brown rice, sesame chicken, all kinds of fresh veggies, it was Delicious!  They had the calories posted on the menu on the wall.  It was all of the convenience of fast food, with the quality of fresh veggies. After I got some food, I went to the Big Bro Big Sis  office.  As you know, I’m a mentor in the program and one of the Littles had a clothes drive to help those in Haiti.  An anonymous volunteer was so inspired by her desire to help Haiti, that he pledged to donated 50 Cents for every pound of clothes donated.  I took all of my fat girl clothes that I’ve had in a huge trash bag for months.  It felt really good to get rid of 30 pounds of fat clothes. If I gain the weight the weight back, it won’t be easy, because I’ll have to buy a whole new wardrobe.  In just a couple of hours that Little was able to raise over $6000 and tons of clothes for the people of Haiti.  It was really special to be a part of it.  You can help by texting “HAITI” to 90999 or going to http://www.redcross.org/. 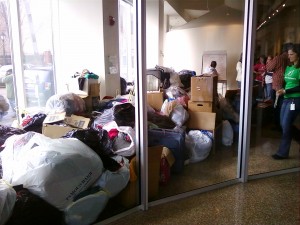