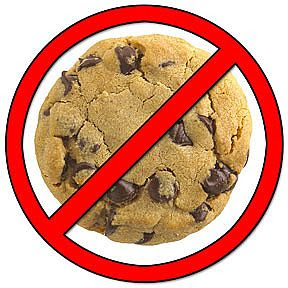 The two things I gave up, Liquid Satan and cookies. A while back, after reading the book Skinny B!tch, I and learned about all of the harmful ingredients in soda pop aka “Liquid Satan”, and I decided to stop drinking it. It was really hard, I realized I was actually addicted to the caffeine and had a nasty little soda habit. However after a couple of weeks I stopped craving it. The low calorie mix-ins that you add to water, helped during the tough times. I just realized that lately, I haven’t told you guys how it was working out for me. I’m still soda-free! I don’t even really think about it that much anymore. Throughout the day, I always drank at least 5 cups of water, and it was hard not having something with flavor with meals. But as Roni said, drinking water is an acquired taste just like beer or coffee …. One night I had a lot to do, and “needed” a soda for the caffeine boost. I bought my all time favorite kind, Mountain Dew code red. It tasted awful, I mean really awful, like plastic, it just tasted fake and gross. I never thought in a million years that I would say that! ….When I came back home on Monday and saw that last box of Girl Scout cookies, I said to myself, did I really go to LA and decide to give up cookies? I kinda panicked. What the heck was I thinking? Who gives up cookies? I LOVE cookies…I could eat cookies everyday…then I thought…oh yeah, that’s why….While I was in LA there were free cookies everyday at the training center. After I made my decision to give them up,it was easier to resist. To me it’s easier to totally give them up instead of tricking myself into believing that I can eat just one and be satisfied. Well I’m still adjusting to losing 3 hours (switching from pacific to central time zone, in addition to day light saving time). So, I think I’ll call it a night.

What Did Carli Eat Today?

B– Oatmeal and a Protein Shake
L– Grilled Chicken Sandwich w/ chz and a side salad
S– Popcorn
D– Meat loaf, sweet potatoes and broccoli
S– ate a muffin, had a sweet craving