I’m Not a College Kid Anymore

I really wish I could blog every day, but I just don’t have the time.  So I guess sometimes I will have to combine two days of training updates in post since I’m working out 5 or 6 days a week.  Yesterday, I met my new workout buddy Tee at the History Museum in Forest Park.  She asked if we were walking and talking or just listening to the iPods.  I told her that me and my little sister usually do both.  She liked the idea, so we had one ear bud in and the other out so that we could hear each other.  We had a really good time, our personalities blend well, and we chatted the whole time about all kinds of stuff.  We power walked and talked for 2 miles.

I bought a Groupon for Big River Running Company because wanted to go get some new running shoes.  Tee wanted to go check out the store too, so we trailed each other to the store on the south side.  They checked out my old shoes  to see the wear patterns picked a better Brooks

running shoe that would be best for my flat feet.  They felt so good, it was a much better fit than my old ones.  They felt nice and bouncy.  Before I checked out I saw a product called “Yankz” that keeps your shoes tied so you don’t have to tie them every time you put them on.  I bought it, not because I’m too lazy to tie my shoes, but it’s so annoying to have to stop and tie my shoe when I’m working out.  I saw some negative reviews online that it’s overly complicated to assemble.  I totally agree.  I asked the guy at the store to put it on my new shoes for me, and it still was a little tricky for him.   But, once it’s done, it’s done…. 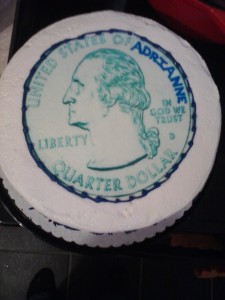 Last night my Big Little Sister continued her 25th birthday celebration with a house party.  She had the cutest cake with a Quarter on it! We had a ton of fun!  We played taboo and spades and cracked jokes until the wee hours of the morning.  I staggered in the house at 2:53 AM.  I set my alarm clock and the alarm on my cell phone before picking out some clothes for my 7AM group training session.  I should be okay right? I’m still young right? I only gave myself 15 minutes to throw on some clothes and get to the park.  I was so glad training was in Forest Park this time, because I definitely wouldn’t get lost.  The team met at the visitor’s center, but I don’t think I had ever been inside.  I signed in and we had an injury prevention clinic.  The guy talked about taking ice baths to relieve inflammation and lots of other good stuff that honestly I was too asleep to process or remember.  However, I was awake enough to hear that there would be massage tables when we came back from our walk. 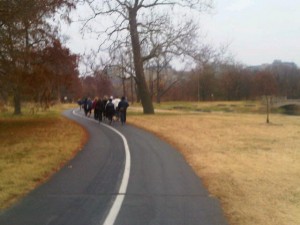 Y’all know I have issues with being last, so I was determined to keep up with Coach Tina.  I did keep up for a while, but then I couldn’t keep up with the brisk pace, so for most of the walk I was in the middle of the group.  It was pretty much the same path that I usually take when I go to the park, so I knew every curve and what to expect along the path.  About half way through, we stopped and she taught us some important stretches.  It was a nice chance to catch my breath and meet some of the other walkers.  I was so excited to see so many juicy ladies like me.  In my mind everyone was going to be thin and overly energetic, while leaving me behind.  But our team has all shapes and sizes striving for the same goal, it was beautiful! When I got back, I talked to the injury guy about my aches and pains.  I told him about that knee and my ankle that you guys always hear me complain about.  I expected the same ol same ol advice, lose some weight and take a pain reliever.  But instead he sat me down and narrowed down the specific points of my pain.  I was a little embarrassed that he had to touch me, because I did NOT take a shower this morning, AND I just finished walking 3 sweaty miles.  I was smelling like onions.  I apologized for my odor and he told me he works with athletes all the time after training and it was no big deal.  I got on the table and he started massaging my knee and my ankles and all the muscles in between… it was wonderful!  “What ARE you???!!” I asked him, because the only thing that came to my mind was Magician.  “A doctor” he replied.   I said “What KIND of doctor?” He told me he was a chiropractor that specialized in sports injuries.  When I stood up there was NO pain. I couldn’t believe it.  I felt like I should’ve tipped him or something.  He gave me his card and told me that I don’t have any major problems, just tendonitis.  His free sample treatment was better than the free sample they give you at Charley’s Steakery that makes you want to buy the whole sub.  I will definitely be going for a follow up visit…..Well, today I learned that I ‘m certainly not a college student anymore, and I require more than 3.5 hours of sleep to function.  So with that said, I’m throwing in a load of laundry and taking a nap!