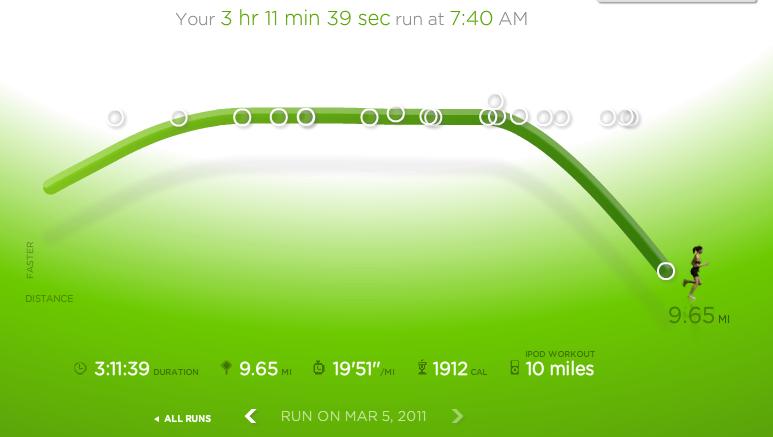 I slept through the first alarm on my night stand, I don’t even remember hitting the snooze button.  It was my backup alarm on my cell phone that actually woke me up.  Now I only had five minutes to get dressed and out of the door to LLS group training out at Creve Coeur Lake.  My brain simply does not function at 6:30 in the morning.  I picked up last night’s Zumba pants and Febreze air freshened them, and grabbed a Michael Jackson T-shirt out of the drawer.  I stumbled around mostly still asleep while I put on my shoes and tried to find my iPod.  By the time I had let Nyah out and was actually on my way out of the door I would’ve been almost 30 minutes late for group training.  When I opened the door a burst of chilly wind hit my bad knee and the cool misty rain slapped me on my face.  I immediately shut the door and headed back to my bedroom.  I was just a few seconds from taking my shoes off before I realized how ridiculous it would be for me to be up and ready and not training.  I really don’t have time to get sick from walking outside in the cold and rain for hours around a lake, so I decided to call the gym, secretly wishing they weren’t open yet.  “It’s a great day at the family YMCA, this is Rose, how may I assist you?!”  I reluctantly said to Rose, I guess you are open, I will head that way, and she replied cheerfully “we will be waiting for you!”

I called my little sister for backup, I wasn’t even sure if I would get an answer.  Much to my surprise she did answer with her cheerful voice….  I’m never pleasant when people call me in the morning on a Saturday.  Maybe that’s something I should work on….  Anyway, she agreed to go with me, but she specifically said “I’m not walking 10 miles with you.”  I think she caught on from the last time she was tricked into the long training session.  I told her “you can leave me after a few miles and come back and get me.”  She agreed.  In the gym we decided to do five miles on the track together and then I did five miles on the treadmill.  By the time I sweated my way through mile six, I was regretting my decision to wear last night’s funky pants.  My mother would be so disappointed that I was too lazy to do laundry and actually Febrezed some sweat pants….  By the time I got to mile 8, I was pouring sweat.  I think the little Michael Jackson figure on my shirt was even sweating!  I stopped and stretched and convinced myself that I could make it just two more miles.  This old guy was checking me out, and left his machine and came and got on the treadmill next to me.  He was only there for a few minutes before he left.  I might have looked cute, but my sweaty funk was anything but cute.  I kept reading my Joel Osteen book and finally finally finished 10 miles.  I was so happy I would’ve done a cute Zumba dance but I hurt too much.  My little sister brought my car back in one piece and I came home and took a nap to recover before tonight’s fundraiser. 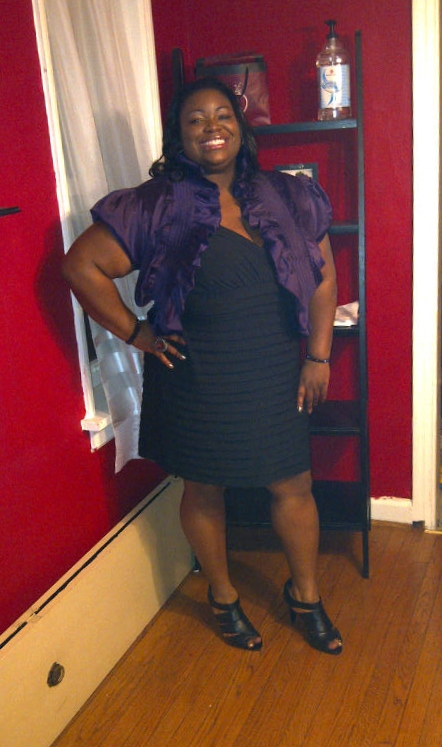 My Big Little Sister’s job had a Mardi Gras themed silent and live auction fundraiser.  We got all dressed up and went to a fancy hotel in Clayton.  We were surprised to see these kids carrying around a little dog.  We later found out that his name was “Mardi Paws” and he was part of the auction.  How cute my sister said, we should bid on him.  I told her I already have a fur baby and you have a two-year-old.  She said I will bid on him first, just for fun just to get things going because he’s so cute!  We overheard other people talking about how the dog went for the thousands last year and how many people wanted him this year.  Certainly her low bid would get things going.  When the auctioneer started off, my sister raised her bid number.  He called for the next highest bid, but not one of the 300 other attendees raised their hand, he called another number, no one else raise their hand.  He went through this for about two or three minutes.  I laughed harder and harder as each second passed, and my Big Little Sister started to twitch nervously.  SOLD, to the lady in the back! 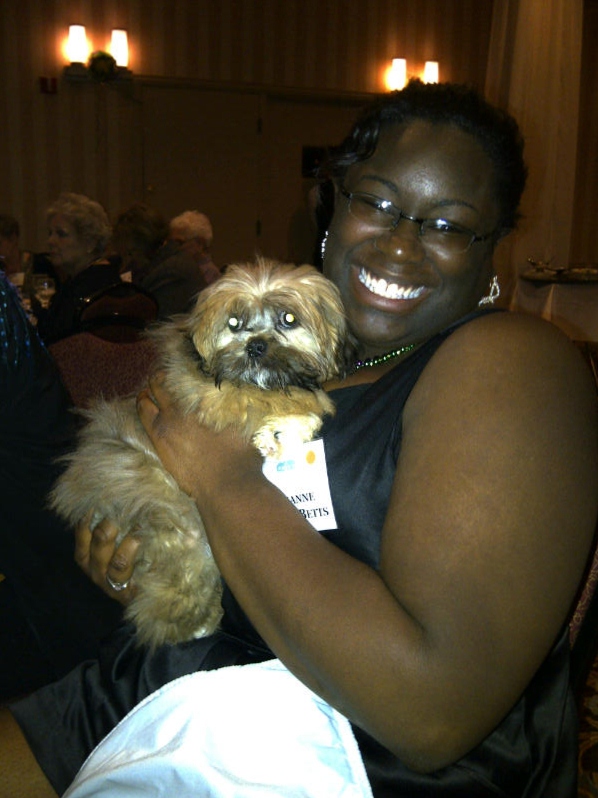 At this point I began to laugh almost uncontrollably, I was laughing so hard that there were tears in my eyes.  They brought my sister her new baby in a laundry basket with a bag full of goodies.  I continued to laugh at her.  I said give me my nephew, I will hold him and while you go check out.  It was for charity so, there’s no turning back.  I babysat last night and most of the day today while she got a crate, a leash and everything else you need for an unexpected surprise like my nephew Mardi.  (I’m still laughing even as I type this post!) We just hope my niece isn’t allergic to him.  He’s an adorable 4 month old  pure bred Lhasa Apso. 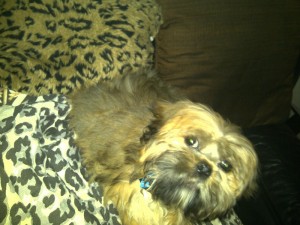