Going on a Treasure Hunt

My little sister joined me on my walk in the park today.  She came out of the house wearing her family reunion t-shirt that we got down in Mississippi.  Coincidently, I had on mine too.  We both laughed at the thought of how silly we would look walking through the park in matching t-shirts looking like Tweedle Dee and Tweedle Dum. …Oddly enough, Me and my Big Little Sister frequently have on the same style clothes and the same colors, almost every time we see each other and it’s never planned.  Sometimes we try to outsmart the other, and we change clothes so we won’t be dressed alike and still end up looking like we planned to coordinate.  When I talked to her on the phone before my friend’s b-day party the other weekend, she said, I know we won’t be dressed alike.  But, when she walked out of the house, we both had ruffle shirts, cute ripped jeans and black studded flip-flops.  Isn’t that strange?! …  But, this was a first for the Me and my Little Sis.  Anyway, once we got to Forest Park, she said she wanted to see the Historic Tree within a Tree site.  I told her it wasn’t that interesting the first time I ran across it.  But, she still wanted to see it.  I reminded her that I saw the tree during my Half Marathon training, and that I had no idea how deep in the woods the little tree really was.  I couldn’t even remember exactly where it was, and wasn’t planning on a six mile Treasure hunt on a Tuesday evening to find a dead tree.  We walked toward the mini forest that was totally green and full of life, it was the complete opposite of the barren trees during my winter training.

When we got to a fork in the unpaved road nearly hidden with plant life, I went left, back towards the car.  It was hot, and I had stuff to do at home.  After a few minutes we realized the tree must be the other way. She turned around.  I did not go back, and I told her to meet me at the car.  I knew she wouldn’t stay in the scary forest by herself, especially since it would be getting dark sooner rather than later.  A few minutes later, she wasn’t too far behind me with a pouty face because we didn’t find the hidden treasure.  However,  I on the other hand was satisfied.  When I got back to the car, I had walked for 45 minutes, 20 minutes past my goal. Yay! I’ve earned another Pink X. 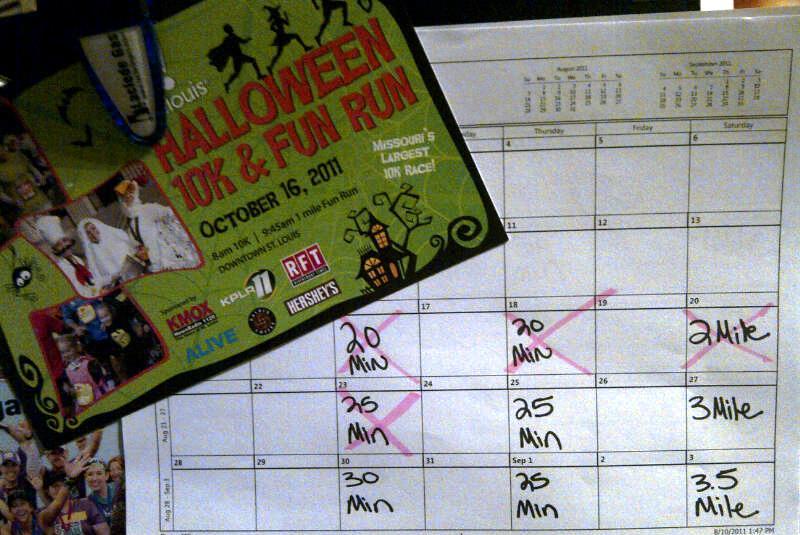