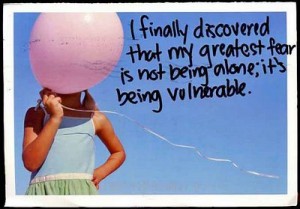 I had my counseling session today.  I told her that the past week had been a little rough, and my eating had gotten a little out of control.  But this time, there was no deep psychological explanation tracing back to my childhood habit of cleaning my plate, or some secret self sabotage hidden agenda buried under protective layers of fat separating me from the world.   I was just generally feeling discouraged about the long journey ahead. She asked me how I feel about expressing that feeling to others.  I told her that it made me feel vulnerable and weak.  As a Christian counselor, she told me that God sees incredible strength in vulnerability. I explained to her that this was pretty much a foreign concept to me.  I mean don’t get me wrong, I know that God is will be there  etc etc, but in general vulnerability was never on the positive side of the list for me.  I never associated being vulnerable with strength.  She asked me to give it a try, and to reach out to someone right during the midst of the struggle.  I told her that I usually like to process things first and then bring it to someone else.

But, I have to refer to the old adage, “how’s that working for you?”  Apparently, it’s not working for me, and so I told her that I would be open to her suggestion.  (She commended me for always willing to be open to try something new, even if it initially doesn’t seem like something I want to do.)  Of course, she told me not to express my deepest feelings with everyone, and to find a special person to share with. Sometimes, here on my blog I show you guys complete vulnerability (just like I’m doing now in this post) but in real life, outside of the blogosphere, I’m not nearly as open.   There are plenty of times than my own family has stumbled across my blog  and called me up and said “What?! Why didn’t you tell me that?”

After exposing myself in my counseling session I did feel even more vulnerable, and all I wanted was to do was stuff down the uncomfortable feelings with Taco Bell, a cheeseburger or ice cream, it didn’t really even matter what food as long as it would mask the uneasy feelings.  I wanted to eat junk and go home and sulk on the couch in front of the TV. In that moment, I decided to test her seemingly backwards “strength in vulnerability” theory.   I was in my car alone, and I called on God right then and said out loud “I cannot make a healthy decision on my own right now, I’m weak and vulnerable, will you help me?”  And you know what, it worked! I guess he was listening. I got the sudden urge to go to the gym instead of the drive thru.  I called my Gym Cousin who 2 minutes before I had called up and told go to train without me.  “Ummm changed your mind?” he said quizzically as he answered the phone.   “Yep” I replied, as an easy answer to my complicated state of mind.  We met at the gym and did 30 minutes on the elliptical machine, and THEN did another round of Week 3 of the Couch to 5K on the treadmill.   I almost finished all of the three minute runs, I only cut it short by maybe 10 or 15 seconds. I was so excited and proud of myself!  I’m learning that I guess there can be a lot of strength in vulnerability, sometimes you do have to ask for help.

P.S.  – What Happened to Weigh In Wednesday?

I didn’t weigh in this Wednesday.  It wasn’t because I was afraid of the number.  I just know that I wasn’t mentally in a  place that I could deal with seeing an increase. Who knows, I might have even lost weight this week.   Sometimes I let the scale have too much power over me.  I wanted to focus on the positive Non-Scale Victories.  I finished Week 3 of my training, I owned 3 minute runs, I continued on to Week 4, I allowed myself be vulnerable in the face of God, and I didn’t self-medicate with food, AND I volunteered to help scoop ice cream at church and didn’t eat any. So this Wednesday, I “weighed in” emotionally, and next week, I’ll get back on the scale.