Movin’ and Groovin’ in Hollywood California 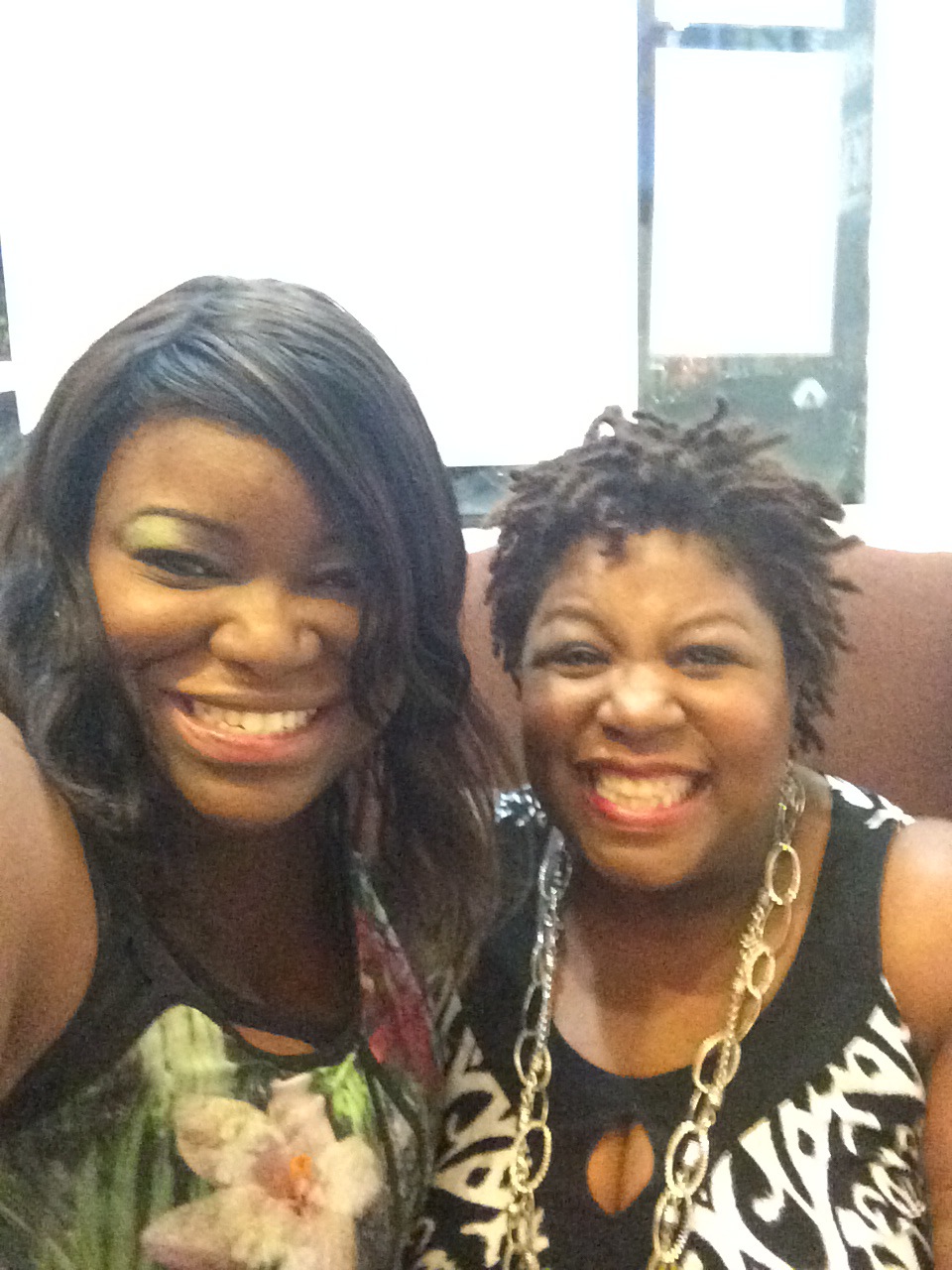 Hey Everybody! I just got back from vacation in Los Angeles, California. I was eating (too much), working out, shopping and hanging with my Aunt and her family.  I had an awesome time. She hosts Cleo King’s Open Mic, every week, where people come and showcase their talents.  This week there were lots of comedian’s, I laughed until my face hurt. 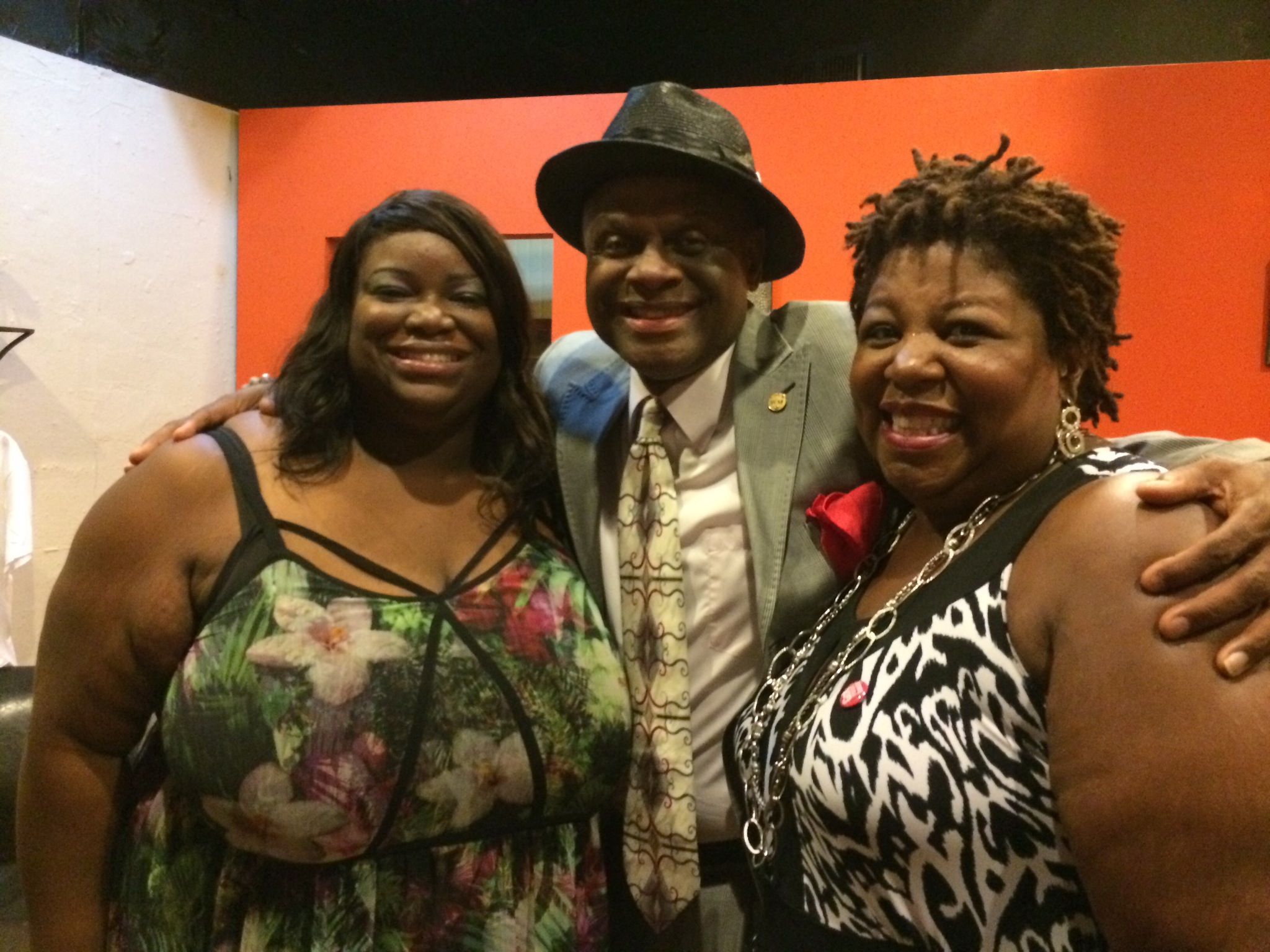 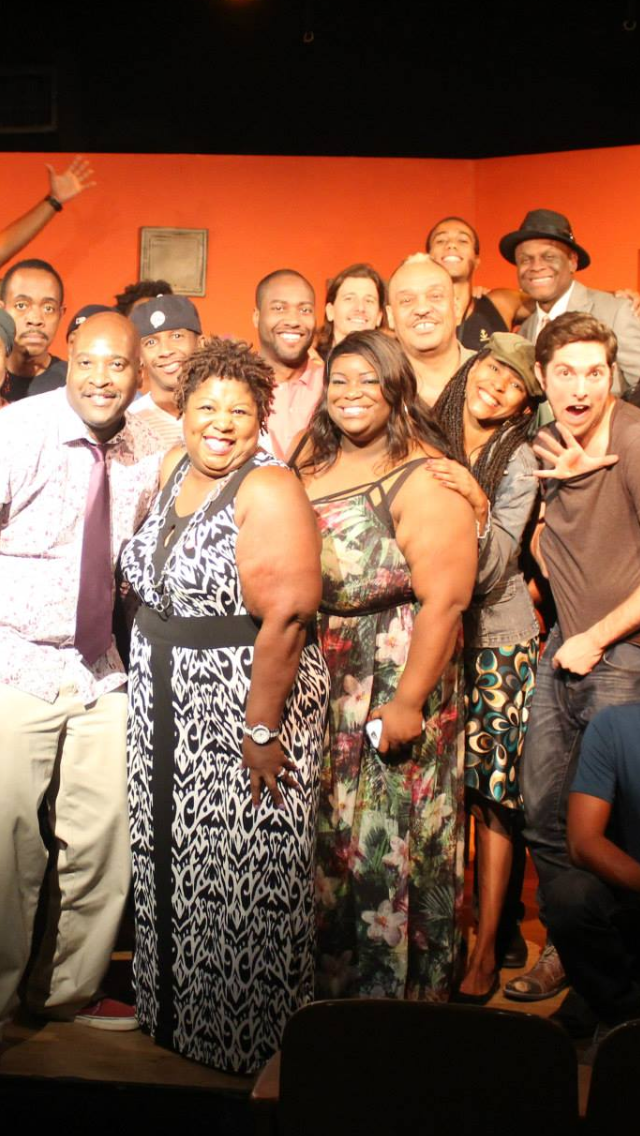 The next day I was supposed to be walking to a nearby park to run/walk 3 miles, but somehow I ended up at the Ross store along the way (shopping of course!) While I was there, my Aunt text me and asked if I wanted to go to a Mike and Molly cast wine tasting party.  Ummm YEAH!  Who doesn’t want to hang out with TV stars? My 10K training quickly got postponed, which it already kinda had since I stopped at the store to shop.  I found some cute blue shoes to go with my blue and white Calvin Klein dress while I was there.  I hiked back to her house in the nearly 90 degree sun, showered and got dressed for the party.  At least I got in about 2 miles round trip.  But not the 3.5 miles that were on my training schedule.

I was so star struck when I walked into the candlelit back yard party with Billy Gardell aka Mike playing jazz records.  Melissa McCarthy aka Molly wasn’t there, she’s so busy these days, but so many of my other favorite cast members were there.   I wanted to scream I was SO Freaking excited! But I just smiled and kept my cool.  Of course my Aunt is a celebrity too, fans recognize her everyday.  People ask to take pics with her while we’re out in public, but we eat quesadillas together at her house wearing our PJs sooo…ya know, she’s family I’m used to that. But OMG, these were new celebs I’d never met.  They were all so nice, they called me by name, and made sure my wine glass stayed full. After tasting each wine, we each got to go around and say which of the six was our favorite and least favorite. Lou (aka Vince the Mom’s Boyfriend) gave me a bottle of my favorite wine to take home at the end of the night.  I could not believe it!  Agh!  I’m still excited thinking about it. 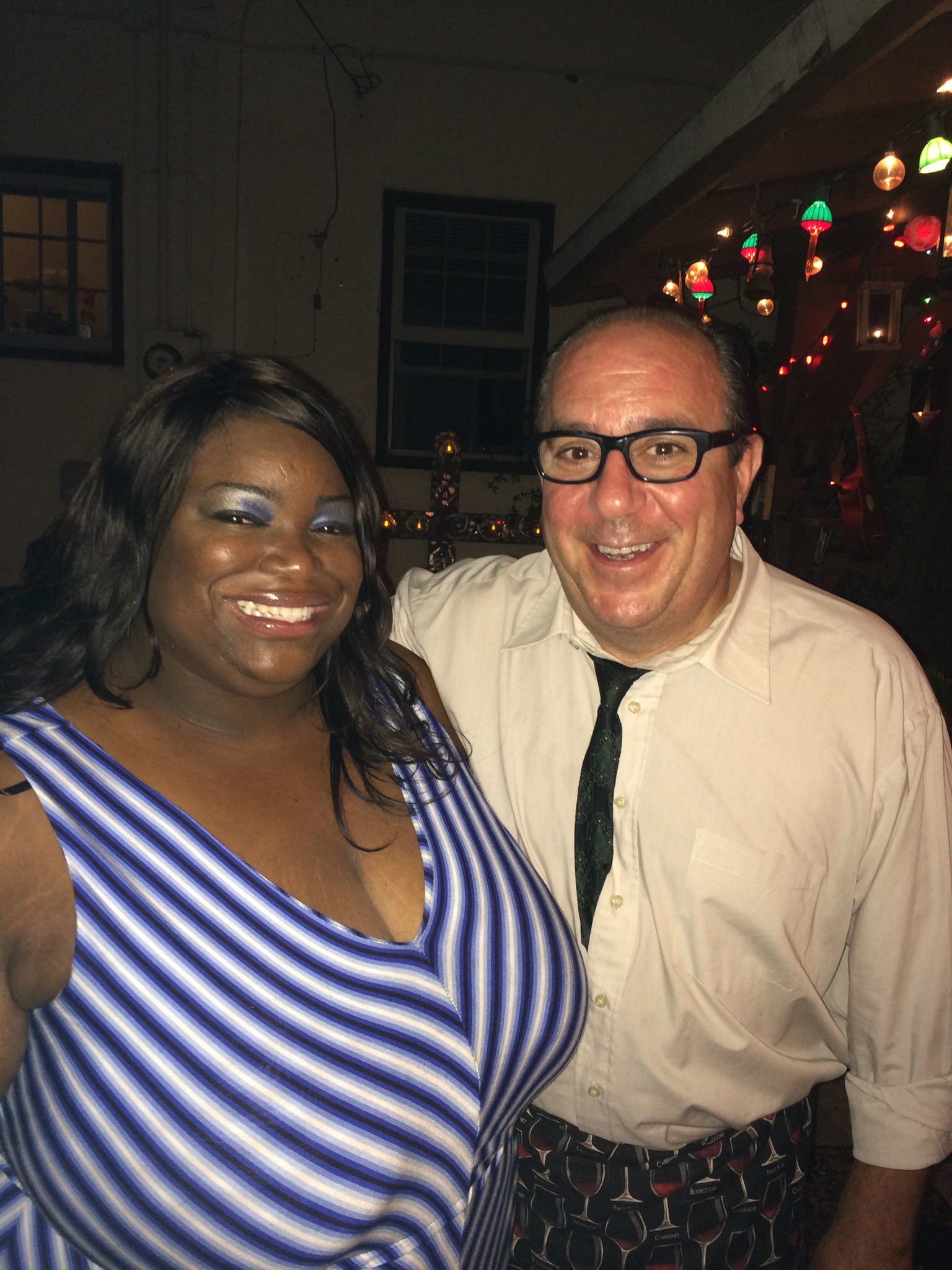 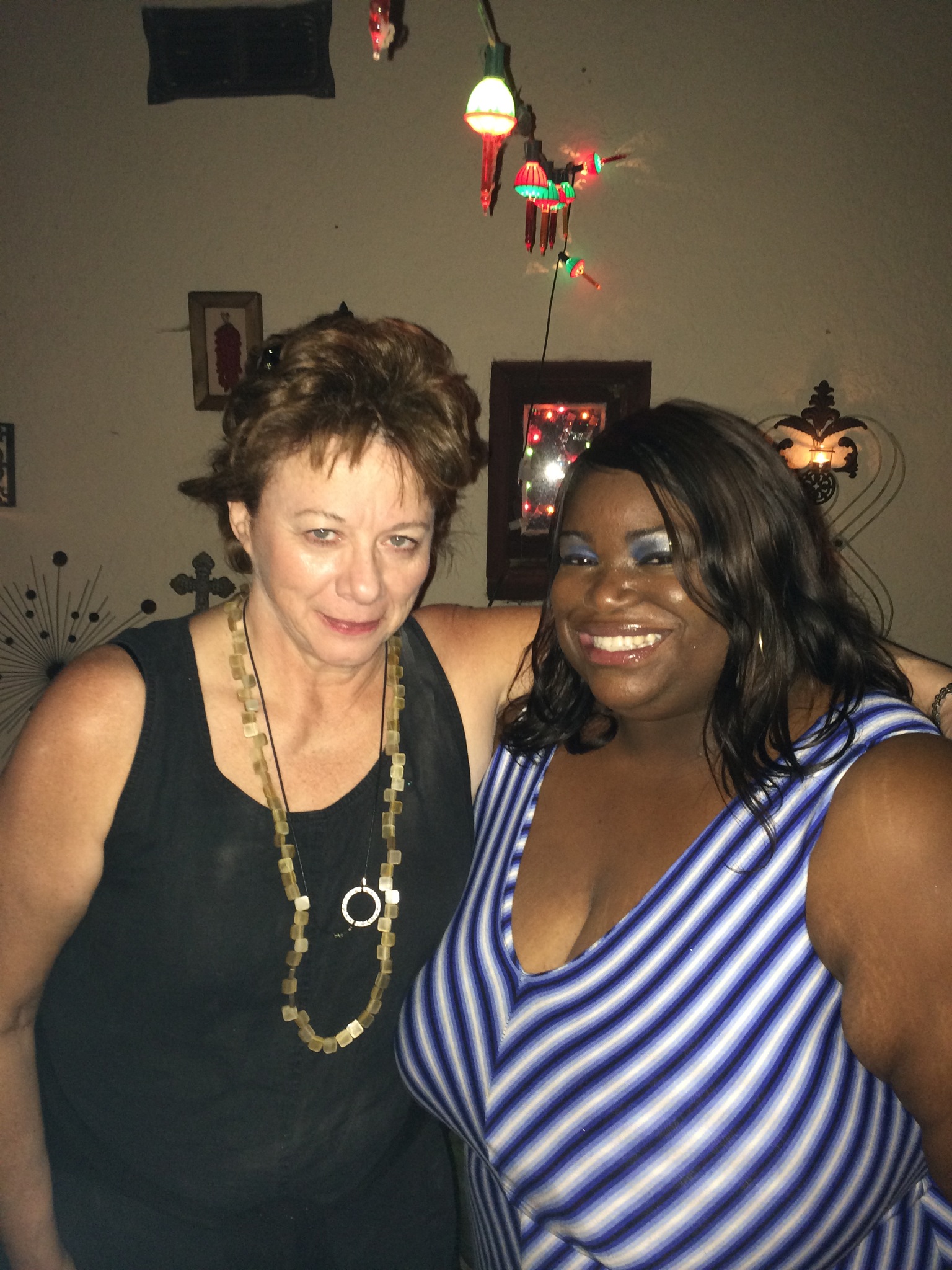 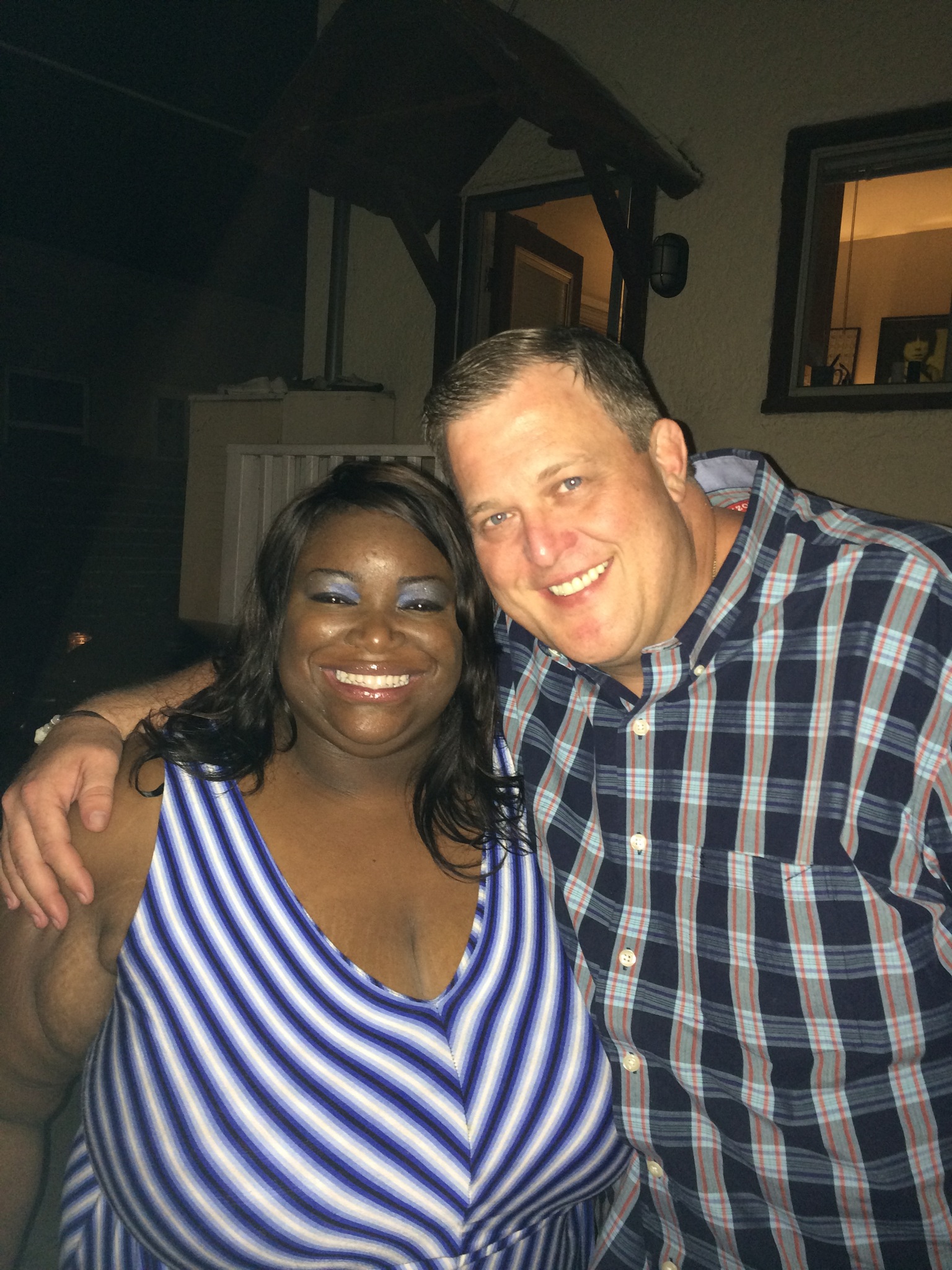 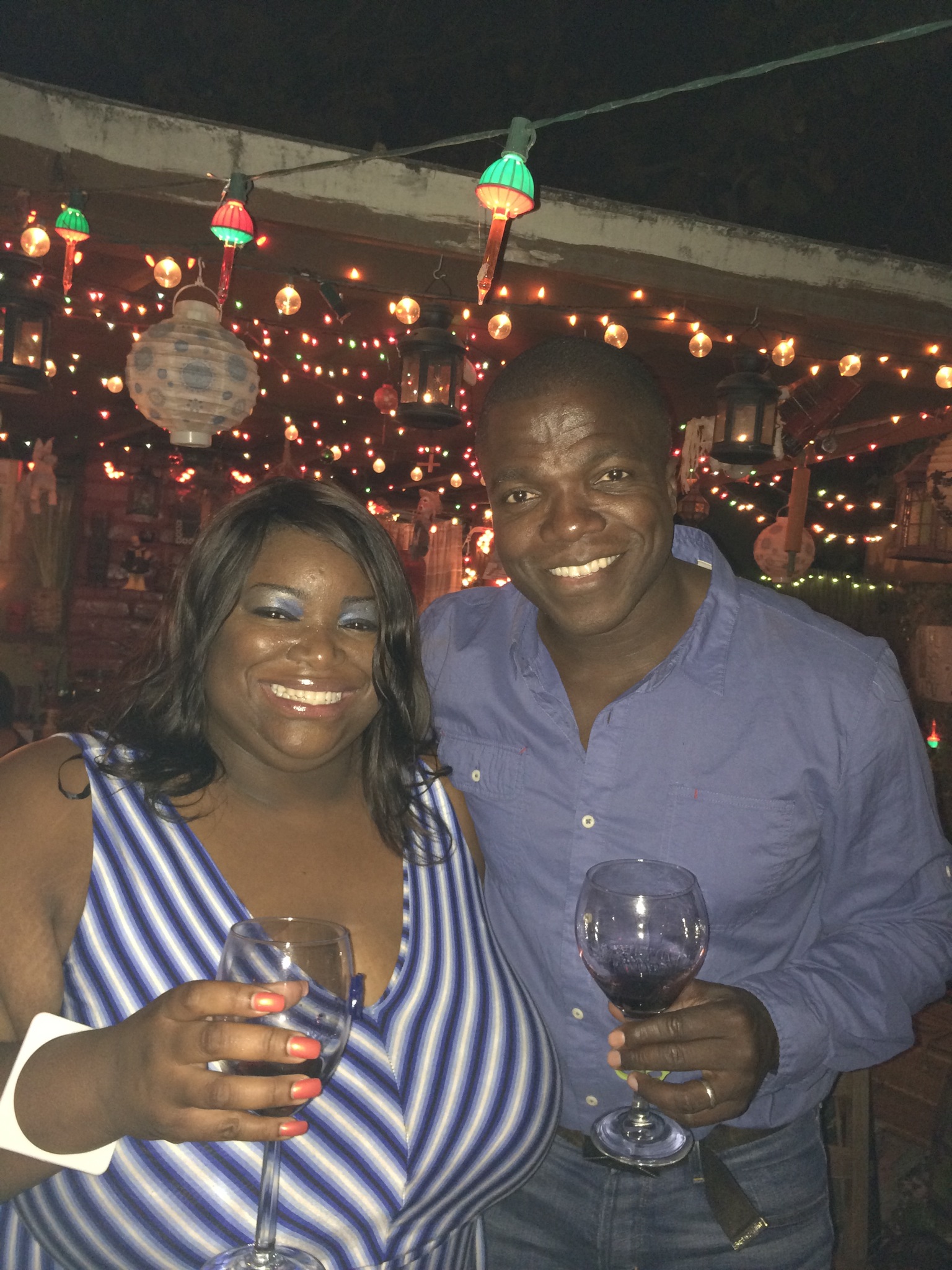 The next morning, we hung out with my aunt’s cast mate and friend Billy Gardell.  He greeted me with a big hug like an old friend since we’d hung out the night before.  It was so surreal, I wanted to take more pics, but I contained myself.  He’s so friendly, not fake Hollywood.  I know celebs are just people, but it’s still really fun to hang out with them.  Later that afternoon, we had a family get together pool party and BBQ in my Aunt’s backyard. We did water aerobics and played games with the kids to burn some calories. 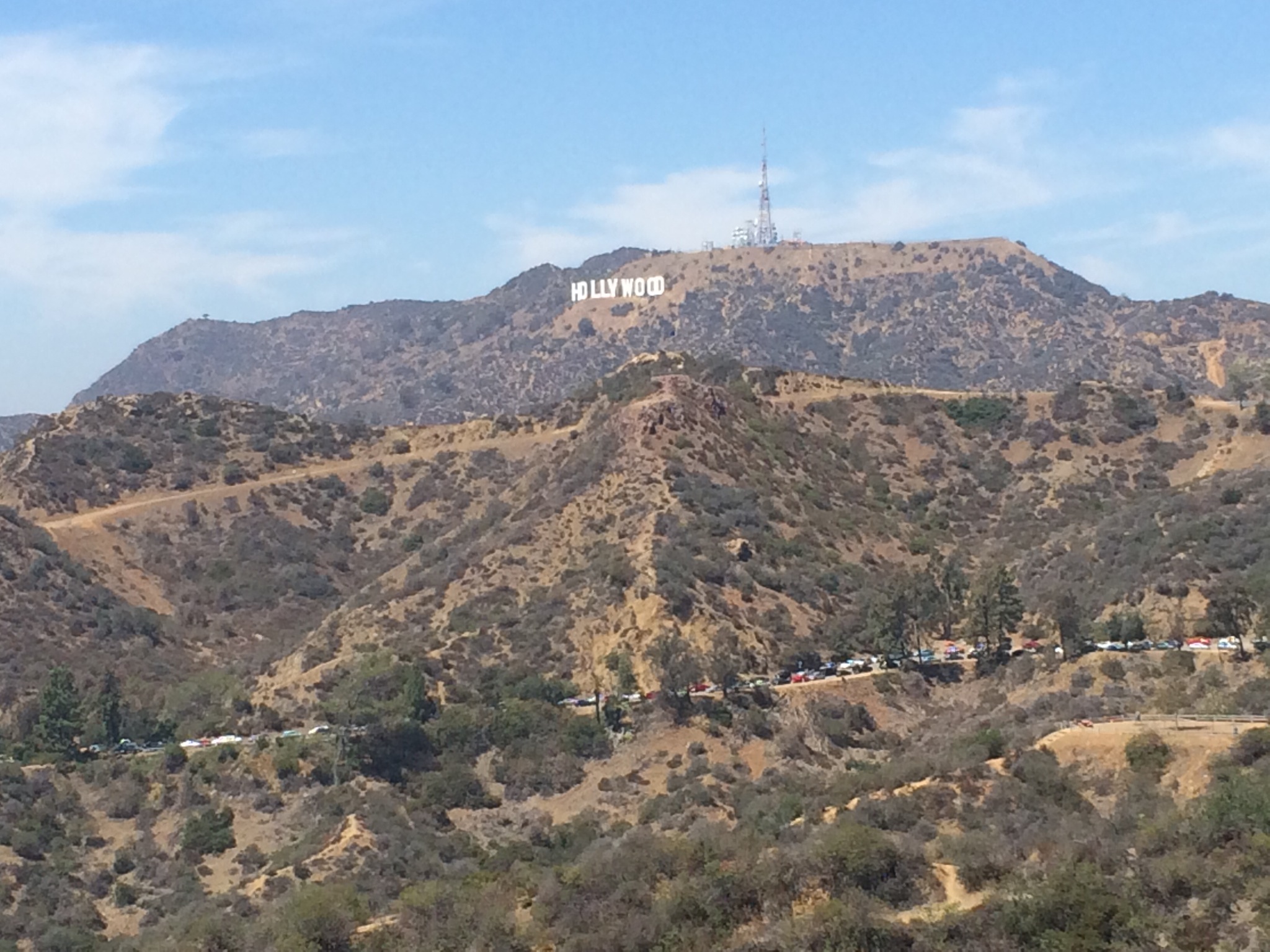 I recently read a fun fiction book about aliens and other dimensions that took place in LA, and the author make several references to the Griffith Observatory.  He probably mentioned the Observatory to tie in the space alien theme. I didn’t think I’d see any aliens there, but I was curious and wanted to be touristy and check it out.  I took my Aunt’s son with me.  Parking was TERRIBLE. We had to park on the side of a street and walk up hill.  I set my Map My Run app on my iPhone to check the distance.  It was nearly a mile in the blazing heat at high noon.  I told my little cousin; hey just see it as a hiking field trip before our Observatory field trip.  Luckily, there was a lady selling bottled water half way up the hill.  It was only $1, but she could’ve charged more, and I would’ve bought it for us. It was worth the hike, there was an amazing view of the whole city once you make it to the top, including the Hollywood sign.  I was tickled by all the questions that my 6-year-old cousin asked me.  After the movie presentation about the universe under the big dome, he asked if the Big Bang Theory they showed us was true? “Ummm some people think so,” I told him.  He also asked questions like, “do birds eat squirrels” when he came in my room at 7 in the morning and “how do they get the bacon from the pig?” during breakfast.  Y’all know I don’t have kids, all these kinds of questions are new to me.  Anyway, one of my favorite parts of the observatory was seeing the moon rock.  It was an actual chunk of the moon! It looked like any other rock lol, but it was cool knowing that it came from the moon.  After watching the Tesla Coil make lighting (and answering more questions from the 6 yr old about how it relates to the Tesla car ), we hiked the mile downhill, this time prepared with a drink to keep us cool. 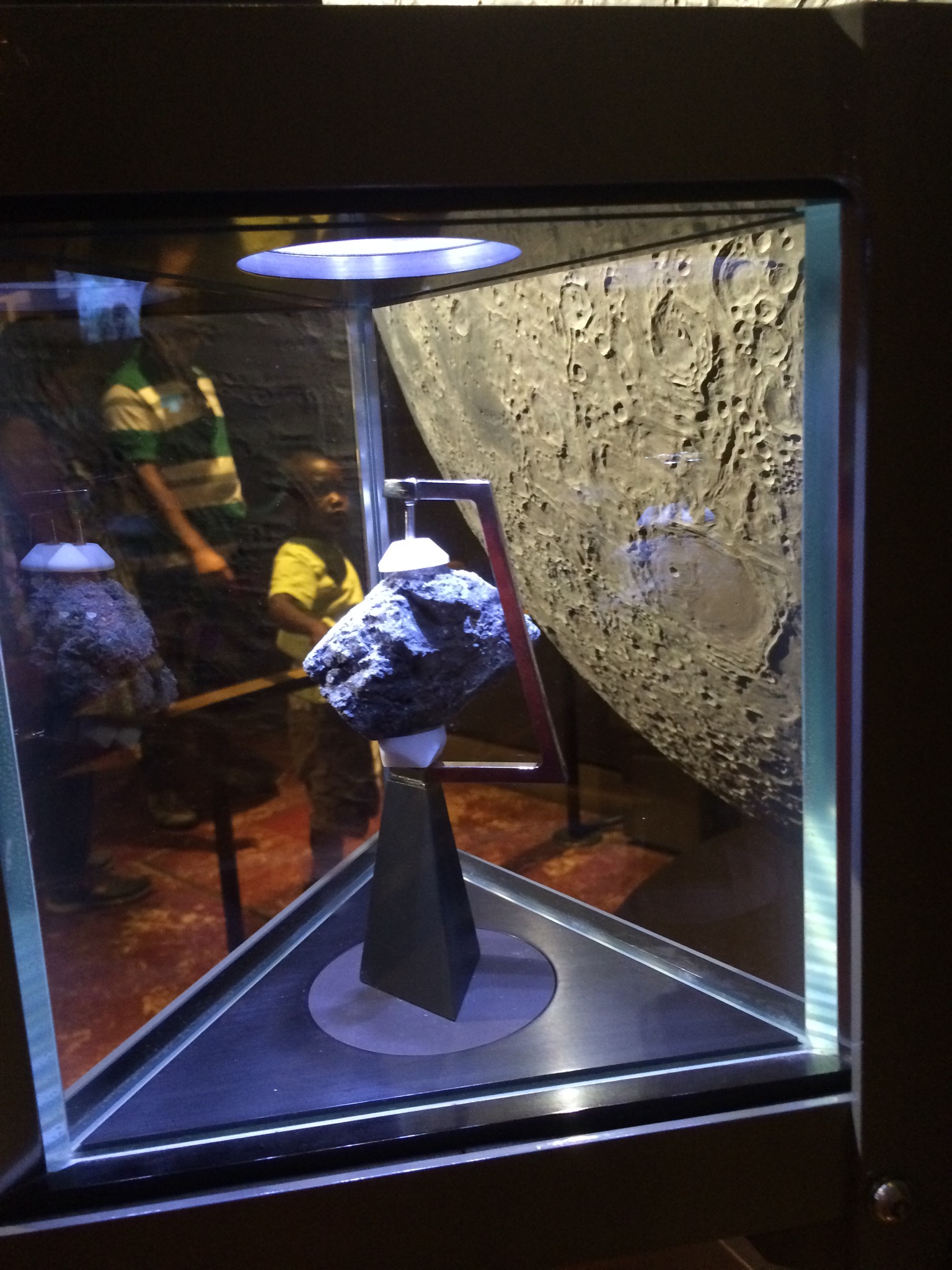 The rest of the time, me and my Aunt had nice dinners, got massages and went to the movies to see Get on Up, the James Brown biopic.  I was really good.  I SO loved my vacation.  I wasn’t ready to come home. 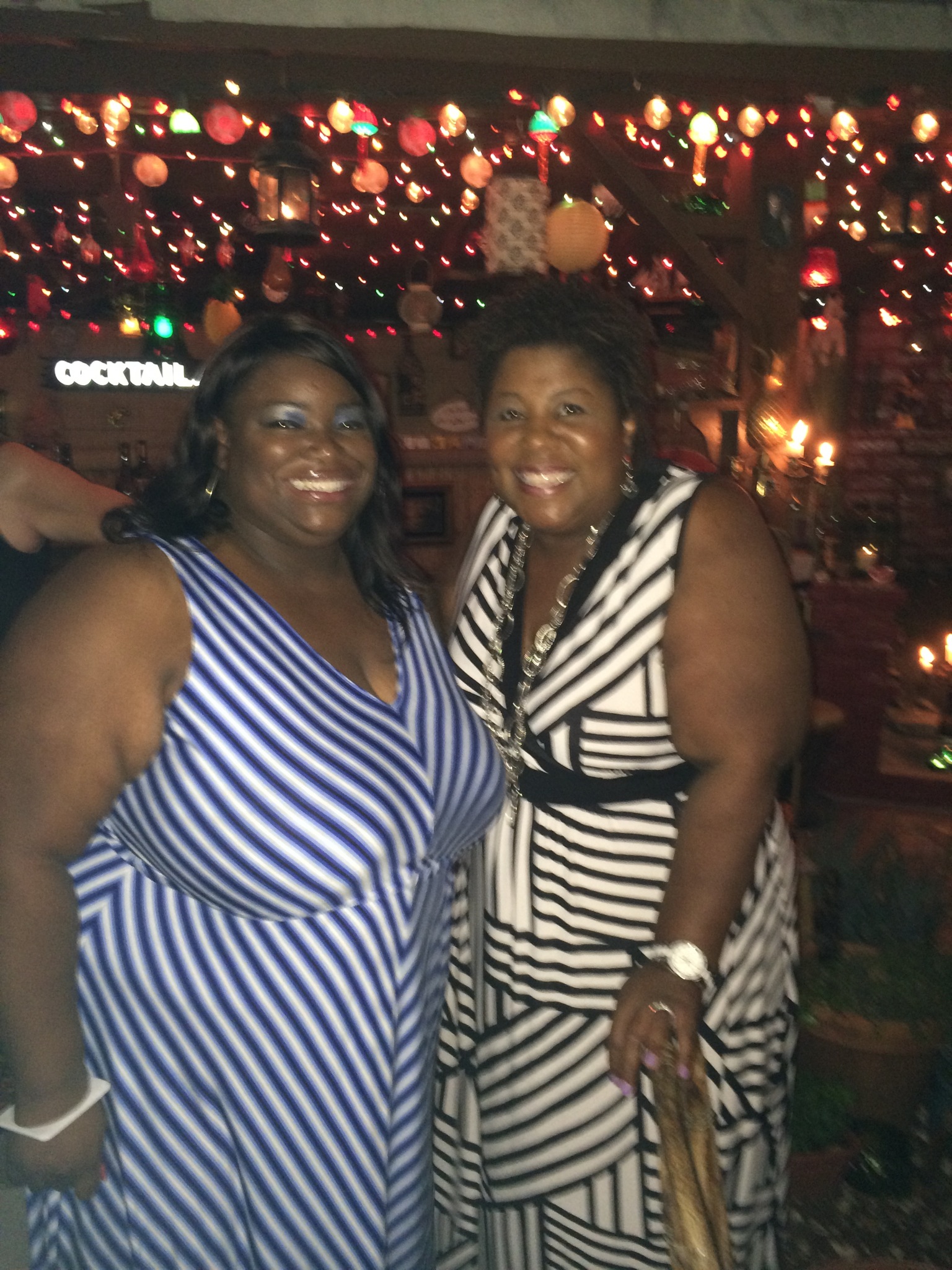