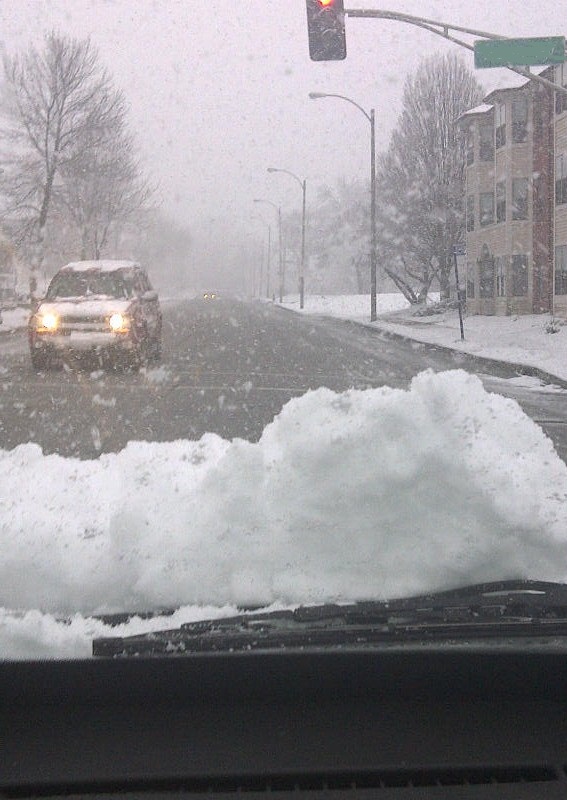 On my Way to the gym through the blizzard!

I set my alarm for 6:30 AM, with the backup cell phone alarm for 6:45 AM.  I went to bed at a decent time last night so fortunately it wasn’t too hard for me to get up.  My Little Sister spent the night and said that she would go to group training with me.  Last night we watched “Buried” with Ryan Reynolds.  That’s 2 hours of my life that I’ll never get back.  We watched him trapped in a wooden box for 2 whole hours….  I checked the weather forecast on my Weather Channel app and it said that the snow and rain wasn’t scheduled to appear until 9 AM.  We got to Forest Park just a few minutes before 7 AM and I introduced my little sister to Coach Tina.  One of the coaches read an inspirational e-mail from the parents of a young boy with Leukemia to remind us why we were doing what we do.  Today’s training schedule called for 12 miles, our longest mileage yet.  The goal was to loop around the whole Park twice.  And to think just earlier this week I was excited that I had done it once.  It was freezing cold, just barely 30 degrees and I didn’t really want to walk the Park for nearly four hours in the cold and impending snow and rain.  About halfway through the first loop I saw Coach Tina and told her that I would do the other six miles indoors at the gym.  My little sister and I completed the 6 miles and went back home.  Weight Watchers is going very well.  I really like the PointsPlus plan where you can eat unlimited fruits and unlimited vegetables with just a few exceptions.  I cooked spinach and egg omelettes for breakfast.  Then I took a nap.  Much to my surprise when I awoke from my nap it appeared to be a winter wonderland outside.  It looked like a blizzard, there were several inches of snow covering the trees, my car, and everything else.  It was the perfect excuse not to go to the gym.  And then I reminded myself that I am accustomed to driving in the snow and that it would be just “an excuse”  not to go to the gym.   I took my little sister home and headed to the gym for my last six miles.  I grabbed a magazine and got on the treadmill.  The last mile or so was pretty brutal, probably because I read every article and I knew that the gym was closing in a few minutes.  I was ready for it to be over.  And then finally it was!  I finished the last mile.  I did just over six miles at the Park in just under six miles at the gym, for a total of 12 miles.  I can’t believe I walked 12 miles in one day.  I do realize that on race day I won’t be able to stop for an omelette & nap break, however that doesn’t negate the fact that I still walked 12 miles in one day.  Even though I didn’t get a chance to post everything throughout the week, I think I worked out at least four times which made me more prepared for today.  I think if I keep up this pace I will be able to make the half marathon a success.