Do You Feel Guilty About Eating Ice Cream? 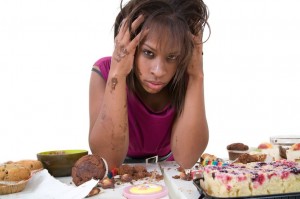 My Little Sister is back home from college for the summer and she had a lot to say about the topic of food guilt. We couldn’t wait to hang out together.  I had a good time hanging out with my Mom, my friends and even my crazy god-brother while she was gone. When I needed my car tire repaired because it had a nail in it, my brother took me to a tire repair shop in the ‘hood for a good cheap deal.  Some guy named Uncle Dawg was smoking “something” while they repaired my truck tire for $5 dollars.  $5 dollars?! I’d say that was a good deal indeed. LOL!

But anyway, I was glad to have my little sister back in town.   She came over my house yesterday and we started talking about the record-breaking heat and how good ice cream would be to cool down.   I said “you know it’s all good when you eat it, until the guilt sets in later.”  “What guilt are you talking about?” she asked confused.  I said “you know, the guilty food cycle where you eat some naughty food, it tastes really good going down, you get a sugar high, and then you feel bad because you know that it was bad for you. And then because you feel bad, you eat ice cream to feel better…rinse and repeat.” She thought that I was totally nuts.  I said “are you serious that you can eat ice cream and feel completely guilt free?” And she replied “Yes of course, I love ice cream and when I eat it I’m happy and I don’t feel bad about it.”  And of course I instantly thought, if you don’t feel bad about it and you’re totally happy eating ice cream, won’t you just get fatter??? And then my next thought was about all the times I felt bad about eating Dulce De Leche Haagen–Dazs or chocolate chip cookies, and how that guilt never lead to positive behavior modification AND I still gained weight.  Feeling awful about eating the tasty calorie laden sugary treats has really only made the situation worse.

My sis was in complete awe that I felt bad about eating certain foods. Heck sometimes I feel bad about eating in general.  It was such a difficult concept for her to even wrap her mind around. So, on our way to FroYo, a frozen yogurt ice cream shop in the University City Loop, we continued our conversation.   She begged for me to explain how you can eat something that you really want, enjoy it, and then feel incredibly bad about it. I told her that I had done it for so long that it just seemed common place and I thought that people always felt bad when they unhealthy food.   I said “you never feel bad?”  She explained that one time she had hit the campus gym for like an hour and a half and then ate five pieces of pizza because she was really hungry and she felt kind of bad about that for a few minutes, but that was all. In general, she doesn’t feel guilty for eating unhealthy food. As we had our conversation I realized how guilt is such a self-inflicted emotion. My Sis pretty much looked at me like I was crazy, and I felt crazy. I remember watching an episode of Iyanla Vansant on Oprah where they talked about people who carry around immense feelings of guilt from things they’d done to people in the past. I thought those women were kind of coo-coo to inflict such a negative emotion on themselves about situations that were long gone and presumably forgotten about. Yet unbeknownst to me, I was doing the exact same thing with food… feeling bad almost the second after eating it and still regretting it the next day .  I wondered had I always felt like this?  No, actually I haven’t. I can remember in college when was in Weight Watchers and would sometimes overeat in the dining hall. You know, that third go-round at the lunch buffet that totals 2 days worth of Points?  But I didn’t feel guilty.  My reaction to my undesired behavior was not guilt at all. I would simply brush it off and say “okay I just have to go to an extra step aerobics class today, instead of my normal three days at the gym.”  And that’s just what I did. I maintained my 50 pound weight loss for nearly 2 years with that same philosophy.  I didn’t put pressure on myself to eat perfectly according to plan, and I easily forgave myself when I didn’t. 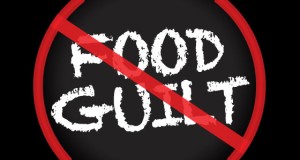 As I prepared my bowl of fat-free frozen yogurt my sister looked at me and said “we’re here now, no guilt!”  It felt so strange to intentionally not feel bad about enjoying a small bowl of ice cream with my sister on a hot and muggy May night. Not long after we walked in, my Gym Cousin rang my cell phone. He had seen me and my sister crossing the street. Of course strong feelings of guilt popped up because I knew that he was leaving from our gym down the street and here I was being fat. “Where are y’all going?” he asked me. “To eat ice cream” I said in shame.” “Oh!” He replied “I’ll join you guys.”

Me and my Gym Cousin talk about everything so I told my Little Sister, “Hey let’s ask him how he feels about food guilt, and you’ll see, I’m normal.”  So we all sat down with our frozen yogurt, topped with everything including strawberries, cheesecake bites and brownie pieces.  She gave me that “you better not feel bad about this” look out of the corner of her eye again.

I asked my Gym Cousin, and he said, “Nope, I don’t feel bad, I’m enjoying it.”  “Sometimes I feel mad when I have to work that much harder in the gym, so I don’t gain weight, but not any real guilt.” … “Told ya!” my sister said confidently.  That’s when I realized, I’ve got some work to do.  It kind of all goes back to what my counselor said.  Much of my relationship with food and my perception of the role my weight plays in my life is purely stuff I’ve conjured up in my head on my quest to be perfect.  So, last night I ate the ice cream, I didn’t feel guilty. And I don’t feel guilty today. I had a protein shake for breakfast, and I’m planning a healthy lunch.  And, I feel OKAY about it. Feeling guilty after the fact has NEVER motivated me to better.  Guilt is kind of a wasted emotion, especially if you’re talking about food you ate days ago.  Do you feel food guilt? How do you feel when you stray away from your food plan?  What advice do you have?